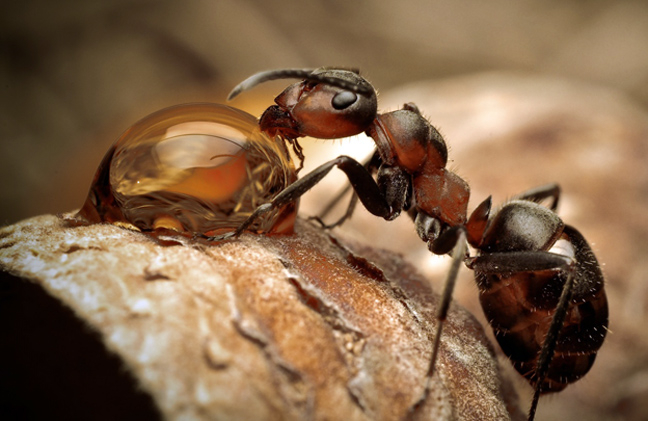 Queen ants dozily dream, while worker ants are forced to get by taking power naps, the first study of the sleeping habits of ants has revealed.

Queen fire ants fall into relatively long, deep sleeps and kip for an average of nine hours every day.

By contrast, workers sleep just half as much and get to rest by taking hundreds of short power naps.

This division of rest may help explain why queens live for years, while worker ants typically only live for months.

It also ensures that enough worker ants are awake at any one time to protect and serve the colony.

Deby Cassill of the University of South Florida in St Petersburg, US teamed with colleagues Skye Brown and Devon Swick of the same university, and George Yanev of the University of Texas in Arlington, US to study the sleeping patterns of the fire ant Solenopsis invicta.

ALSO SEE: What was the black death?

“I decided to see just how lazy the queens really were,” says Cassill.

She and her colleagues raised a colony of fire ants in their laboratory, and created an artificial chamber containing three queens, 30 workers and 30 large larvae. They placed a glass cover over the top of the chamber, allowing the ants to be continuously filmed from above.

Because fire ants generally live underground, the researchers expected that their sleep patterns would not be determined by light and dark cycles. And that is what they found.

Workers fell asleep at irregular intervals, and not at the same time. But the sheer number of incredibly short naps they took was striking.

On average, a single worker ant would take 250 naps each day, with each one lasting just over a minute. That equates to 4 hours and 48 minutes of sleep a day.

That also meant that 80 per cent of the workforce was awake and active at any one time.

“The large number and short naps by workers means that jobs in the nest never go unattended,” says Cassill. “There is always a worker available when the need arises. When work is slow, workers sleep more.”

Equally striking was the contrast between the sleeping habits of the workers and of the queens they served.

ALSO SEE: The Races of Africa

The queens fell asleep at far more regular intervals than their subjects. In fact, the queens even synchronised their naps, with all three queens dozing together.

“It’s very cosy,” says Cassill. “The synchrony of queens occurs because, like hound dogs, they pile atop each other when they sleep. When awake, they separate.”

On average, each queen would fall asleep 90 times a day, sleeping for just over 6 minutes at a time. That equates to over nine hours of sleep each day.

Sometime they would just doze, with their antennae half raised and their mouths agape. When dozing, the queens could be easily roused by one another or by their workforce.

But often the queens would fall into much deeper sleep, with their antennae retracted and mouths closed.

This “rapid antennal movement (RAM) might be an analog to the rapid eye movement in vertebrates,” the researchers write in the Journal of Insect Behavior.

The function of sleep is still unknown.

But for ants, the lack of rest for the workers seems to help ensure the queens get to live a peaceful existence.

“Workers are a disposable caste whose job is to buffer the queen and her royal offspring from agents of death like exposure, starvation and predators. It is the workers who engage in the high risk behaviour, thus the queen lives a long life.”

“Amazingly, queens can live six years before they die of old age. Whereas workers live six months to a year and then die of old age or some accident during foraging,” says Cassill.

The queens of other ant species can live even longer, reaching up to 45 years.

How to go about choosing a pet

Why does wolves and dogs look so much alike?

Life is not perfect. It obviously seem as if there is nothing we will be able to do about it. And here comes love; it fills the entire space of our heart and gives us hope for the future. Often, when you have put all your trust in it, you find it slipping away.

Many great authors have written the best principles of love and how best to manage it. Unfortunately, love does not seem to work with theories. But here is a book you will definitely love to have around. This book illustrates love in all it shades and grey. If you need to have a feel of all that love could come with, then you need to have a copy of MIDNIGHT FLURRY.

This book is best for young lovers and old lovers seeking help with their love life.

COVID 19: Some states set to resume school in Nigeria